In a previous article we talked about how to activate Google Play parental control. In this article we will tell you another functionality that we can activate within Google Play. Let’s talk about the recently released Play Protect, the antivirus provided by Google Play directly on our devices. 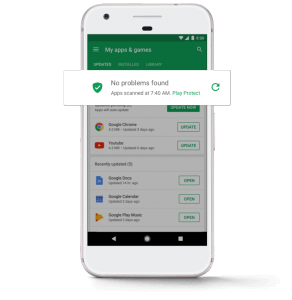 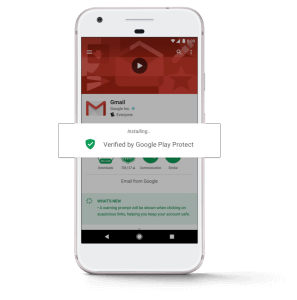 We all worry about what our children can do on the device and that’s why we installed SecureKids, but we are also concerned about what our children can install, applications that are inappropriate for their age and that can install malicious applications. That is why Google has put a system that is already installed on every device to protect them, it is called Google Play Protect and is installed inside the Google Play app itself. To access and view Google Play Protect status we can do it from Google play settings -> Play Protect. Where will indicate if all the applications that we have installed are correct or however we have some malware. In addition, we can configure the application indicating if we want to look for threats on our device and if we want to check the applications that have not been installed directly from Google Play. In this screen we can also see the last time the apps were analyzed by Google’s Android antivirus. 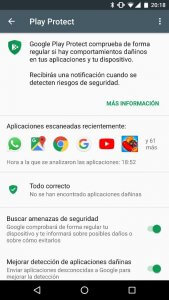 Now when we prepare to download an app from Google Play will automatically check the security of that app before it is downloaded. For this to be possible Google analyzes more than 50,000 million applications daily as we are told on its website. In spite of this it may leak some malicious app, but do not worry the moment you find it will warn you and remove it from the device. This way you will have your child’s device completely safe.

For more information you can visit www.android.com/play-protect/

This website uses cookies to improve your experience while you navigate through the website. Out of these, the cookies that are categorized as necessary are stored on your browser as they are essential for the working of basic functionalities of the website. We also use third-party cookies that help us analyze and understand how you use this website. These cookies will be stored in your browser only with your consent. You also have the option to opt-out of these cookies. But opting out of some of these cookies may affect your browsing experience.
Necessary Always Enabled

Any cookies that may not be particularly necessary for the website to function and is used specifically to collect user personal data via analytics, ads, other embedded contents are termed as non-necessary cookies. It is mandatory to procure user consent prior to running these cookies on your website.