What is Internet Grooming? 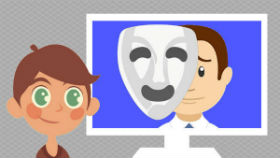 Internet Grooming happens when an adult tries to gain the affection and the attachment of a child with the goal of getting sexual content using social media.

In many cases, the adult performing internet grooming can pretend to be another child or teenager with the purpose of getting his/her confidence in a easier way. This process may last weeks or even months in some cases, with the goal of befriending the child or gaining the child's friendship step by step, as a way to receive compromised content from them. Sometimes, this content can be obtained using threats, and after succeeding, it can be used to blackmail them with the obtained content in order to get even more content.

Internet Grooming is considered the first steps of sexual abuse, as the ultimate goal of this practice is the sexual satisfaction of the adult.

How can we fight Internet Grooming?

Nowadays, we can see how often in the networks there are challenges that become viral.

Sometimes they are for good cause like the “Ice Bucket Challenge” where you had to throw buckets of ice water to raise awareness about the ELA. But these challenges do not remain here, there are also other ones that can lead to serious injuries.

Some Android devices have a feature which allows to add new users on the same device. Using this feature, someone who is not the smartphone owner can use it in a quick way without having to make major changes on the device.

A parental control is essential in today’s society with all the devices minors have at their reach.
The fact minors get devices at an earlier age makes this type of services more than necessary.

From earliest ages, the youngest of the household begin to use devices with Internet access. These devices give the possibility of evolve to teaching, but they can also imply serious dangers of which we have to be aware of both parents and children.

Today I bring good news to all of you, especially for the little ones at home and their families. There is already a phone number you can call to check your doubts and questions about security and the threats of the internet! It’s a completely free phone number. It has been created to solve your doubts and answer your questions about safety and threats of the internet. It’s aimed not only at parents and educators, but also at kids and teenagers who might need it.

According to Oxford, to educate is to give intellectual, moral, and social instruction to someone, especially a child. When it comes to the Internet, educate is teaching, show and guide, never the act of hiding. Secrets make things more attractive, and parents should guide and show their children the good path of the Internet.

This website uses cookies to improve your experience while you navigate through the website. Out of these, the cookies that are categorized as necessary are stored on your browser as they are essential for the working of basic functionalities of the website. We also use third-party cookies that help us analyze and understand how you use this website. These cookies will be stored in your browser only with your consent. You also have the option to opt-out of these cookies. But opting out of some of these cookies may affect your browsing experience.
Necessary Siempre activado
Necessary cookies are absolutely essential for the website to function properly. This category only includes cookies that ensures basic functionalities and security features of the website. These cookies do not store any personal information.
Non-necessary
Any cookies that may not be particularly necessary for the website to function and is used specifically to collect user personal data via analytics, ads, other embedded contents are termed as non-necessary cookies. It is mandatory to procure user consent prior to running these cookies on your website.
GUARDAR Y ACEPTAR